This is posting #4 of a camping and bicycling trip I took with some friends through the Finger Lakes region of upper-state New York. Here's the complete set of postings:
This was my favorite biking day.
The night before was Ash, Ingrid, and my first night actually camping at Watkins Glen. The campsites are nice! Even the section equipped with electric outlets is decently wooded, the back of our site was bordered by forest and, around ¼ mile downhill (and on the other side of a fence), the Watkins Glen grotto area.

The next day Ingrid and I aimed to bike along Seneca lake towards a town midway up, Dresden, and turn back when we were around 20 to 25 miles out. After a thrilling downhill from a back park exit (for bikes and pedestrians, not cars) into Watkins Glen town we began a gradual four mile ascent on route 14. 14 continued to be fairly gradual and regular, with a decent bike shoulder and cars frequently zooming by at high speeds. The regularity and traffic got old pretty quickly, so we decided to investigate alternate paths - an easy option, since we had no set destination, besides eventually returning to our starting point, we could venture as we wished. That turned out to be a very good choice. We wound up on some smaller roads, with less (and less zippy) traffic, more interesting, varying, terrain and more interesting and often alluring small towns along the way.

Ingrid and I would have liked to find a continuous road closer to the lake, but the maps didn't show any such. On the other hand, a lot of the piecemeal roads were intriguing, so we agreed to take one, Glenora Road, that dipped down from the ridge to the lake and then, a mile or three later, back up to the Lakemont-Himrod road, (County?) Route 1. That turned out to be a marvelous choice.

A long (scintillating) plunge from the ridge on Glenora Road took us into the hamlet of Glenora.

I was totally charmed by this little settlement. On its own road from the through-road on the ridge, it seemed outside the rush and frenzy of the larger world. We headed to the "point" - a branch from the road through the town that took us onto some land jutting into body of the lake. The sign keeping us from going onto the dock didn't put me off (see the photo above, or visit it in a virtual reality rendering to look around) - we could entirely enjoy where we were, and I can respect reserving personal property. But the story kind of starts there.

I don't take a lot of pictures (alas, would have liked to spice up this account a bit more), but did happen to catch this next one of someone walking towards us out from the town.

The fellow approaching us on the roadway in the second photo offered to escort us onto the dock. His name is Matt.

When asked how much of the year they resided in Glenora, Matt's reply was "as much as possible". He didn't say a lot, but after indicating how quickly the water got deep and giving us some time on the dock - I got another panoramic photo there - see below, or visit the virtual reality rendering to look around - he offered to show us the falls, which we had overlooked on the way into town. Apparently Matt notices people wandering into town and offers to show them around, in a friendly way. Maybe he's not the only one, I'm just inferring that he's done it for people in addition to us from some of his remarks. 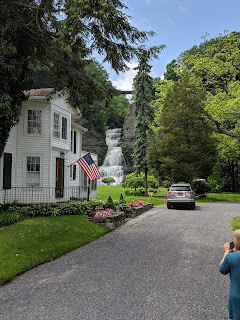 I was touched. It's not like anyone in this lovely little town had to do this! It felt quite open, a generous welcome from this hamlet. I felt welcomed in a place I admired.

There was another cute incident, not far down the road.

We returned to the highlands and continued onwards. Eventually we got to some signs on our chosen road, indicating it was closed to all but local traffic. No reason was indicated. We were not particularly worried, since our course was somewhat arbitrary, but w were curious what the cause could be, so decided to continue on the closed road. In around ten miles we arived in a small town, I think it was Lakemont, that was having some kind of town meeting, and had closed the main street to traffic - and posted detour signs 10 miles up and down the road! At the closed main street we got on the sidewalk and asked one of the event staff if it was ok to continue through. His response: "Sure! You might want to use the street - you'll have it to yourself, no worries about cars!" The town seemed quite pleasant, and combined with my experience in Glenora I had increased sense of a place going at its own time and pace.

Continuing the thread of food/fuel during the day, when we got to about our midway point we went down a no-outlet road, by a railway track. The dirt and gravel road crossed some marshland to a small, very quite (apparently not currently occupied) farmstead. We took a breather just before the farmstead and had some food - me, one of my apples and some of Ingrid's grapes, while Ingrid had some olives and cheese and grapes and I don't remember what else. I did a ten or fifteen minute walk back and forth on the stretch of road through the marshland, feeling the strong, warm afternoon sun and listening to croakers croak and starlings tweet while they soared through the marsh reeds and thistles and grasses and trees. I could feel the world breathing. Or was that me?

I was delighted with how our navigation back played out. We decided to try a more inland route, approaching the park from the north, rather than north-east. According to Ingrid's bike navigating app (in the rare moments when it had internet connectivity), this might avoid having to go so far downhill that we would need to climb back up the steep hill on which we exited the park in the morning. The roads and territory we traveled through were beautiful, and in fact we entirely avoided reascending that downhill in the near-approach to the park (though there was one steep hill in what was otherwise a descent to the park entrance). It was brilliant! (-:

One more note for my continuing food-fueling exploration. While the apple + grapes picked up my energy for a good while, I once again felt it draining when we were around 10 or 12 miles out from our days destination. This time I had some dried apricots and dates, and the energy pickup was even more pronounced than it was with the apple. (They were all quite delicious treats for me, besides.) I made it back a little worn out, but in a normal, not extreme way. Hooray!

Popular posts from this blog

May 23, 2020
We've noticed that comments submitted from Apple Safari (Mac or iPhone) are dropped without any notification if the blog is set with Comment location = Embedded. Having set it to Pop up (I think), it worked. We're going to try some more tests. That's what this post is for! From the comments testing we discovered some useful things: Using Comment location = embedded: Is necessary to enable replying to specific comments. Comments posted from Safari (laptop or iOS) are silently dropped. It looks to the person posting the comment that it went through, but the blog moderator sees no sign of it at all. Using Comment location = Pop up or Full page: Inhibits option to reply to other comments – no comment threads Enables comments from Safari The trade-off is clear. Losing comments from people who think they submitted them successfully is not acceptable. Particularly from a prominent browser (currently estimated to be a bit less than 4% of users). I just hate to lose comment threadin
5 comments
Read more

Exploring Adaptation of the Underscore for Online Practice

May 20, 2020
I had early experience with the  Underscore  a few times while  Nancy Stark Smith  was developing it, before she found a name for it. Since those early days it has gotten a name and continued to grow, and it has become a practice for many, many groups around the world. I have been leading Underscores for the DC Sunday jam almost every month since the December 2013. I love how the Underscore works, love the sharing situation that it tends to foster. In recent days of the Coronavirus quarantine, a group exploring sharing of movement online has started to explore adapting the Underscore for online sharing. I've had the opportunity to try what others are doing, and an opportunity to adapt it for an online session myself. I wonder, can we arrive online at the often open and receptive shared presence if can foster? I'm not sure, but believe that something is possible. Whatever we discover, I know it will be different from an in-person Underscore. Online meetings are different in cru
6 comments
Read more

June 08, 2020
Contact Improvisation offers extraordinary opportunities to explore movement cooperation with others and with oneself. I've been curious a question about how to find in solo moving the kind of inspiration that can come from dancing with others. I had been exploring a practice for a long time before the COVID pandemic. Having to concentrate on solo moving during the pandemic has given me the opportunity to resolve some questions about how to describe the practice and its purpose, enough so that I feel ready to describe it. One of the things I love about doing Contact Improv is a sense of attunement that happens, with others and myself, through just mutually following the points of contact. For many years I've been curious about what helps to cultivate this, and have experimented with ways to do so in solo moving – in my warmups and general solo dancing. During the COVID-19 quarantine I have had more opportunity and heightened focus on this exploration of solo movement (in-person
2 comments
Read more