June 27, 2019
This is posting #2 of a camping and bicycling trip I took with some friends through the Finger Lakes region of upper-state New York. Here's the complete set of postings:
This was my first day of substantial bike riding. It also turned out to be a significant test of my endurance.
The destination was Clark Gully, "Birthplace to the World". Steve informed us that the Seneca know it as the place where the The People emerged from the earth. (Wikipedia's page about the Seneca People mentions this towards the beginning of the History section, and The Traditional Origin and the Naming of the Seneca Nation includes more of the story/myth.)

It was around a 20 mile ride with some decent hills, and a nice place to explore when we got there. We planned a round trip, with maybe some cycling in the area.

Most of the roads we biked on Tuesday were lovely - small country roads, well kept, and in beautiful farmland country, lots of vineyards and some livestock and other crops, occasionally interspersed with small towns and even tiny crossroad settlements. Most of our biking this day was not beside a lake, except for a period at our midway/return point, where we biked near the southern tip of Canandaigua Lake.

I got pretty tired over the course of the day - more about that later. No matter how tired I got I could still feel - smell, nearly taste - the fresh earth, wildflowers, loam, grasses, and trees through which we were wandering. That was a big part of why I was there. Sometimes I was sore and bored, but then that would pass, and I still might be a little sore, but I could feel myself sinking in to the time I had, with a sense of being in place that can be a bit elusive in my daily life. 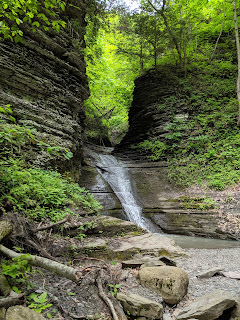 At the Clark Gully arrival spot there's a small parking area, some landmark signs, a clearing in a field across the road for gatherings, and a trail beside a small creek to an upstream gorge. Steve, Susan, Ingrid and I hiked the trail, and eventually encountered the falls, which had dug the gorge as a channel through stone (I believe it's shale) in the hill. I continued onwards to explore further, climbing the stone around the falls carefully - the stone was wet and muddy and slippery. Someone had left a small climbing rope to help, but it was old and I didn't want to depend on it. I didn't continue very far - past two of the series of three falls - because I was aware that my companions had seen me disappear around the corner at the falls, and were waiting for me to reappear. But even the brief exploration was wonderful, the sort of challenging terrain that most interests me. Traversing requires full attention and diligence, and doing so brings you to unusual and lovely places - in this case, the intricately sculpted gorge with fresh cascading water. This little climb and exploration was a trip highlight.

I didn't think to take pictures while I was in the gorge, but as an afterthought took that one while we were walking away. Happily, the web page I found while looking for info about Clark Gully (and mentioned, above), "Birthplace to the World", describes the area and has a bunch of pictures.

Ingrid and I continued a bit further onwards to see Canandaigua Lake up close, descending to the lake on Sunnyside road to see the tiny waterside village of Sunnyside. I was reluctant to go much further, because I could tell that I was tiring and that knew that there were some serious hills on the ride back.

We started our return trip, choosing to retrace our route because that was supposed to be the least strenuous way. I began to be concerned about how depleted I felt. As we ascended some hills I could tell that my energy wasn't returning, so I decided to try an experiment - get some apples to eat before we ascended the largest hill we came down on the outgoing trip, which ended in the town of Middlesex. Unfortunately, the single grocery store we found there was closed - to be reopened in a few weeks, so we weren't going to wait. \-: I wasn't (yet) able to try my experiment. Over the next ten miles I could feel my energy fading, to the point where it was excruciating - even walking my bike up the hills was painfully difficult, and I felt like exerting energy was burning muscle. I do not recall ever before feeling so extremely drained, and drinking water (which I had been doing, a lot) was not helping at all.

At a point around 10 or so miles from our return to the lake house I realized I was going to have to ask Ash to retrieve us, for a car ride back. And as it happens, at that point neither Ingrid nor I had cellular reception! While I was trying to recuperate before walking to seek cell signal, I asked Ingrid if she had any dried fruit in the trail mix that she and Ash snacked during the day. She did, and offered it to me. I sat there and picked through the nuts (I react to nuts and beans with several days of extreme lethargy, so avoid them like the plague) to extract chunks of dried figs, apricots, dates, and raisins. On the first bite I became a ravening creature, obsessed with extracting and eating the dried fruit. It was delicious (it had been a long time since I ate any fruit at all), and it was hard to put down - I tried to stop twice before I was willing to stop. What's surprising is how soon I felt energy return - it seemed like fuel had been added to my empty tank, and I could once again ride! I felt, much, much better.

I walked for a little bit, to let the dried fruit settle, and then we decided to try to proceed by bike. There was one subsequent stop to reseat a cracked chain protector on the electric motor on Ingrid's bike, and soon after that we were returned.

About an hour later, maybe around 6 or 7 (?), I felt pretty queasy. I was still hungry enough and well enough to cook and eat dinner, though. I continued to feel a little queasy through the next day, but it was not too bad, and I wanted to continue cycling. I figured I was going to have to try that experiment on subsequent cycling days, of snaking for energy when I felt the need. It so happens that Ash had called while I was doing that first walk up the hill out of Middlesex, and I had requested that he get some apples for me to bring along on subsequent days cycling, so I had some to try.

As it was, we biked a bit over 50 miles that day, over a moderately hilly route.

Ana Orenstein said…
Traversing challenging terrain with full attention and diligence as an exploration that can bring you to unusual places — lovely as the gorge proved to be; not so lovely on the excruciating 10 miles uphill. That you followed the depth of the experiment all throughout with sustained attention is remarkable. And a treat for me (and everyone that gets to read it) that you contoured this journey with a fine pencil — the poetry of travelers sharing notes along the way.
June 29, 2019 at 12:15 PM

Popular posts from this blog

May 23, 2020
We've noticed that comments submitted from Apple Safari (Mac or iPhone) are dropped without any notification if the blog is set with Comment location = Embedded. Having set it to Pop up (I think), it worked. We're going to try some more tests. That's what this post is for! From the comments testing we discovered some useful things: Using Comment location = embedded: Is necessary to enable replying to specific comments. Comments posted from Safari (laptop or iOS) are silently dropped. It looks to the person posting the comment that it went through, but the blog moderator sees no sign of it at all. Using Comment location = Pop up or Full page: Inhibits option to reply to other comments – no comment threads Enables comments from Safari The trade-off is clear. Losing comments from people who think they submitted them successfully is not acceptable. Particularly from a prominent browser (currently estimated to be a bit less than 4% of users). I just hate to lose comment threadin
5 comments
Read more

Exploring Adaptation of the Underscore for Online Practice

May 20, 2020
I had early experience with the  Underscore  a few times while  Nancy Stark Smith  was developing it, before she found a name for it. Since those early days it has gotten a name and continued to grow, and it has become a practice for many, many groups around the world. I have been leading Underscores for the DC Sunday jam almost every month since the December 2013. I love how the Underscore works, love the sharing situation that it tends to foster. In recent days of the Coronavirus quarantine, a group exploring sharing of movement online has started to explore adapting the Underscore for online sharing. I've had the opportunity to try what others are doing, and an opportunity to adapt it for an online session myself. I wonder, can we arrive online at the often open and receptive shared presence if can foster? I'm not sure, but believe that something is possible. Whatever we discover, I know it will be different from an in-person Underscore. Online meetings are different in cru
6 comments
Read more

June 08, 2020
Contact Improvisation offers extraordinary opportunities to explore movement cooperation with others and with oneself. I've been curious a question about how to find in solo moving the kind of inspiration that can come from dancing with others. I had been exploring a practice for a long time before the COVID pandemic. Having to concentrate on solo moving during the pandemic has given me the opportunity to resolve some questions about how to describe the practice and its purpose, enough so that I feel ready to describe it. One of the things I love about doing Contact Improv is a sense of attunement that happens, with others and myself, through just mutually following the points of contact. For many years I've been curious about what helps to cultivate this, and have experimented with ways to do so in solo moving – in my warmups and general solo dancing. During the COVID-19 quarantine I have had more opportunity and heightened focus on this exploration of solo movement (in-person
2 comments
Read more